Warning: A non-numeric value encountered in /home/customer/www/orgerlab.org/public_html/wp-content/themes/Divi/functions.php on line 5841

Our goal is to understand how the brain integrates sensory information and selects and executes appropriate actions. In particular, we aim to determine the organization and function of neural circuits underlying visually guided behaviors. We use the zebrafish as a model organism because it allows us to visualize and manipulate activity in neural circuits throughout a vertebrate brain. As early as one week post-fertilization, zebrafish display a rich repertoire of innate visual behaviors, following moving patterns, avoiding predators and tracking and capturing live prey. With no skull and transparent skin, the entire volume of the brain can be imaged non-invasively in one field of view, and many neurons are individually identifiable from fish to fish.

from vision to action - watching how the brain navigates the world

The Vision to Action lab uses a combination of advanced optical, genetic and behavioural methods in zebrafish. In recent years, zebrafish have emerged as an attractive model system, as they exhibit a robust set of instinctive visually guided behaviours, while their brain, which follows a typical vertebrate pattern, is sufficiently small and transparent so that researchers can non-invasively image the activity of each of its neurons. Specifically, the team follows the activity of neurons by imaging changes in calcium levels inside neurons, a marker of neural activity, while performing high-speed behaviour tracking to make a detailed, quantitative analysis of visually evoked swimming and eye movements.  In addition, the team develops genetic tools in order to probe and manipulate defined circuit elements with high specificity.

Recent work from the lab described, at single neuron resolution, the neural activity dynamics throughout the brain of behaving zebrafish. While even very simple behaviours involve activity in hundreds of neurons distributed across many brain regions, the team found that these elaborate patterns are consistent across individuals down to a very fine anatomical spatial scale. In addition, the team has also developed a high-speed, real-time tracking system that has allowed them to systematically characterise the swimming behaviour of zebrafish larvae in response to a variety of different stimuli. Using a computational approach to behaviour classification, called unsupervised machine learning, they have identified a core set of swimming movements, and demonstrated how they are used flexibly across different behaviours.

Animals often use distinct gaits to move at different speeds, and this requires the engagement of distinct neural circuits. Zebrafish larvae use different motor patterns, and recruit different spinal interneurons, during slow and fast swimming. Currently, it is not known how the brain computes desired speed or relays this information to the spinal cord. We have developed a system to perform high-speed online analysis of tail kinematics in freely swimming fish, while presenting visual stimuli. We find that zebrafish will adjust their swim speed to track different moving patterns, and they do this by switching between two discrete motor patterns. We intend to discover the neural substrates responsible for this behaviour by imaging whole brain neural activity in restrained fish, during visually evoked swimming at different speeds in a closed-loop virtual reality environment. By thoroughly investigating the mechanisms of speed control in zebrafish larvae, from visual inputs to spinal circuits, we hope to uncover general principles of vertebrate locomotor control.

How neural circuits integrate sensory information to produce appropriate actions is a fundamental question in neuroscience. We aim to address this question using optokinetic behavior, reflexive eye movements in response to whole field motion. Even these simple responses can involve coordinated activity in hundreds of neurons distributed in areas throughout the brain. We image the pattern of neural activity in the brains of transgenic fish, which express a genetically encoded calcium indicator in all of their neurons, while they track visual stimuli with their eyes. Since this behavior is very repeatable, we can systematically record responses from the whole brain with single cell resolution. Presentation of different stimuli, such as monocular, or binocularly conflicting gratings allows us to determine what sensory or motor signals are represented at each point. These experiments represent the first comprehensive analysis of the neural circuit underlying a sensorimotor behavior in a vertebrate brain.

Circuit mechanisms of visuospatial processing in the zebrafish brain

Complex visual behaviours, such as capturing moving prey or avoiding approaching predators, require animals to compute the location and salience of different objects moving in 3 dimensions. These computations depend on dynamic interactions between many interconnected visual areas in the brain. We use transgenic expression of optogenetic tools, and in vivo 2-photon functional imaging to reveal the cellular organization of these circuits and the dynamics of visual processing in response to complex stimuli. We aim to: (1) generate driver lines that target gene expression to specific cell types within the fish visual system, (2) characterize visual response properties and functional topography within these populations and (3) analyse the dynamics of population activity in the optic tectum and other visual areas, when the fish is presented with competing visual targets. Using optogenetics and laser ablations we will interfere with defined circuit components, to determine the link between circuit computations and behaviour. 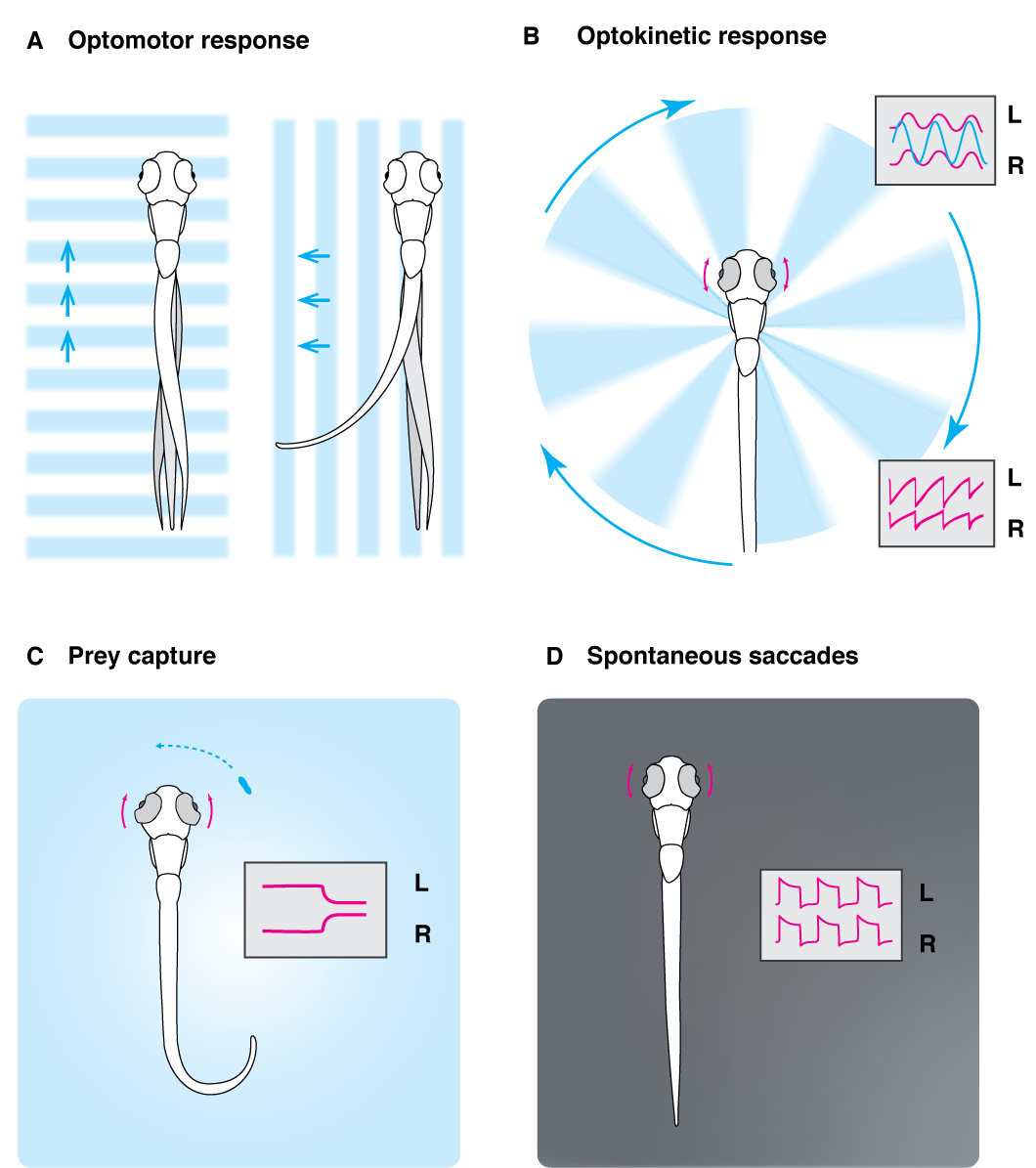